This post describes my progress into my GSoC project at the end of the second week. It does not describe the aim of the project. To read about what I will accomplish over the summer, read this previous post describing the project.

Somewhere in a blog post that contained tips on how to apply for GSoC, I had read that twelve weeks run out fast. Then I had thought that it must not be necessary. But, this time, two out of twelve weeks have passed quicker than I had thought they would. Although there have been exams and some other interruptions in between I have managed to stick close to my timeline.

In the last two weeks, I worked out the design pattern with my mentor. 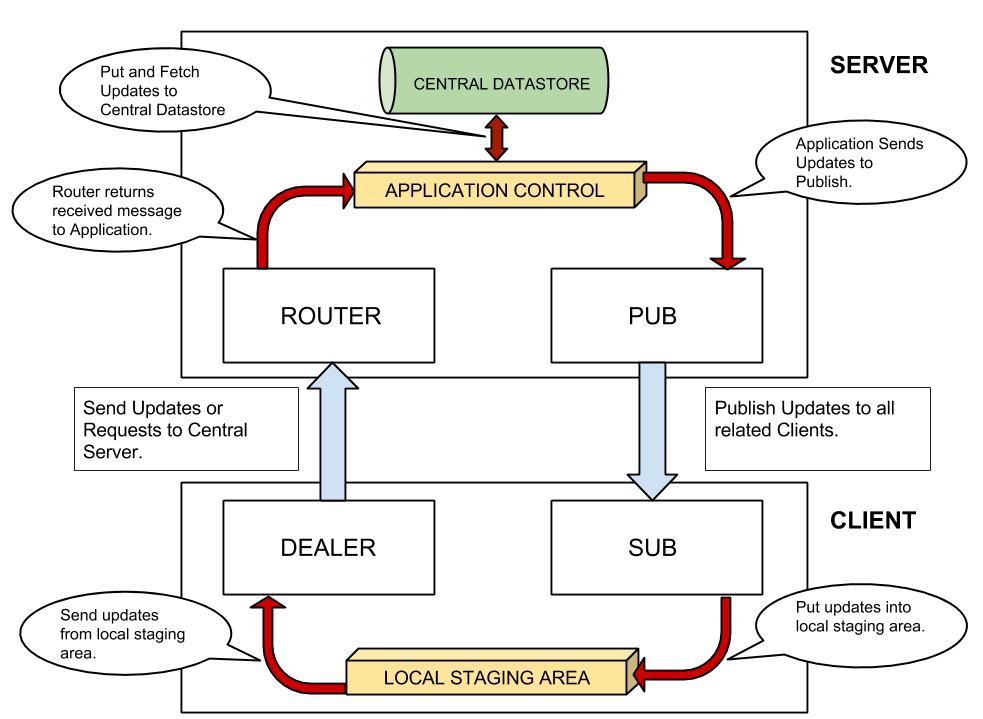 What we’ve done is, separated the entire application into three tiers.

That’s it so far related to the design. And, well this is the part which I have already implemented.

I am not going to write another tutorial on unit testing. The next lines will be just about my experiences with it:

Prior to this project, I had never written unit tests and I saw it as something very difficult to get across. This was a mindset thing for some reason. But now that I had working code and this being a full fledged open source project, none of the code really stands without their own unit tests. Thus, I started looking into unittest tutorials and the documentation at http://docs.python.org ; And surprisingly, this time it didn’t feel so tough or complicated. I wrote basic tests for starting each instance of the client, server and application and tests for communicating between each channel.

Honestly, what I had read about in my Software Engineering paper during the 6th semester, I understood now. I now realized the difference between unit testing and integration testing. I know what a stub is. Back then, I had only memorized the definition and blurted it out on the answer sheet. Practicals have always been a neglected part of our education system. Anyways, this won’t become another blog post critcizing the Indian Education System. Coming back, unit testing is fun and now I think I’m going to keep writing tests at every step.

I read at a lot of places that we should first write our tests then shape our code according to our tests, but I don’t think I’m yet ready for that. That will take some more time honestly. Because I think being able to do that needs one to be really comfortable with writing tests and the specifics must be laid out clean as crystal. Neither of them holds true for me now. So my approach for now will be that I’m going to add a functionality, write its test and improve it until the constraints are satisfied.

The tests I have written aren’t the most ideal, but I’m happy with them since this is my first effort. I expect them to improve over time. One important point I must mention is that tests like sending and receiving data tend to take a lot of time. And it isn’t ideal to always setup a receiver side before sending some real data for unit tests. Well, that’s the point of unit testing. Each test must be independent of other modules or functionalities. Also, the entire testing module should take as less time as possible. This accelerates development each time we run the tests. Although for now I did have to set up some stubs for testing receive calls and similar such calls that tend to depend upon some other components. But, I will most certainly replace them by using Mock. Mock is a very handy testing library, that comes with the standard library Python 3.3 onwards. I’m on Python 2.7 so I simply did:

It lets you mock certain instances and function calls instead of instantiating real objects and real function calls. This saves the time taken by that function call and also returns the simulated results. I took a dab at this, but it wasn’t working out yet. Probably I need to dig in deep with this. But in the coming weeks. In short, this feels like the right way to move forward with the tests in my project.

It’s been fun working on this and am really looking forward to the coming weeks. Once again, all my code is hosted here. You are welcome to check it out! :)